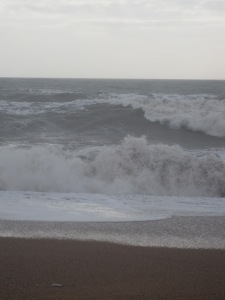 Things were not as they appeared to be. I thought I saw a fragment of coral washed up on the beach, but it was a tiny white plastic reindeer half-buried among the flotsam and jetsam. Then a pink ribbon of seaweed caught my eye – a torn piece of rubber glove. The translucent skull of a bird turned out to be perforated plastic. Things became even more surreal when I saw a face someone had drawn on a pebble, looking up at me like Humpty Dumpty.

I was on Hive Beach, Burton Bradstock, on a stormy day beachcombing for things to draw. I was hoping for small multi-coloured scallop shells, mauve, yellow, orange and white, perched on the pebbles like tiny butterflies. I had seen huge quantities of these a few years ago and have been hoping ever since to see them again. May be I would see a few spider crabs or a fossil or two.

So today I was scanning the strandline for sketchable wildlife, only to find myself wading through a tangle of detritus. A landslip of clay like a frozen wave stuck to the black and white feathers of dead razorbills and guillemots among the bright colours of plastic, fishing wire and nylon rope. I counted at least a dozen dead birds on a short stretch of the beach. Some killed by the violence of the storms, but there is also evidence of chemical pollution along the coast.

Waves rolled in, driven by the relentless gale, then broke in thick ropes of water fraying to white on the pebbles. The sound filled my head like a migraine and I was blinded by the salty spray. Through the mist I saw a glossy brown mermaid’s purse (the egg case of a dog fish) and a ribbed piece of a large cockleshell like a bird’s wing. I put these finds in my pocket to draw later.

My visit hadn’t turned out as I anticipated. I had had a vision of what I wanted to find and was not looking properly at the strandline, seeing coral where there was plastic, seaweed where there was rubber … It took me a while to look properly and to observe what was actually there instead of what I imagined might be there. I suppose it’s human nature to have preconceptions and to anticipate what is to come, but I felt this was a lesson to me in how important it is to keep an open mind and to observe impartially in order to see clearly. 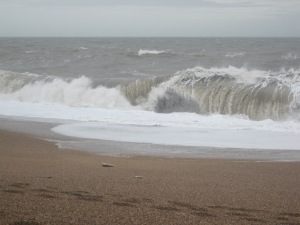 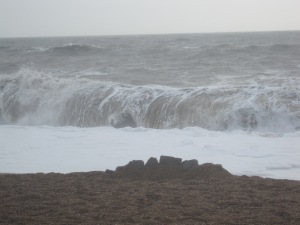