Behind the Chesil bank at Abbotsbury, there is a hinterland, neither beach nor countryside. This area between high tide mark and the beginning of fields is known as the Littoral Zone. This is an apt name (regardless of the spelling) as the sea rarely reaches this area, so it is often littered with a strange array of objects, blown by the wind and caught in the scrubby undergrowth. This marginal area is joined to the land by a coastal path, a kind of selvedge that binds the border of the beach and attaches it to the countryside beyond. Yet this path also acts as a separation zone, the plants either side of the track being quite different.

Just as thoughts crowd your mind between sleep and waking, so the findings in this marginal area are random and sometimes disturbing. Ragged feathers and weathered scraps of driftwood mingle with plastic bottles, brightly coloured cigarette lighters and cellophane packaging and a nightmare selection of anglers’ rubbish. Light pink sea fan coral flits on the breeze and sometimes fossils of sea urchins surface from the shingle when you least expect to find anything worthwhile.

Mid-September and the sun is low in the sky, silvering glimpses of the sea and glossing the pebbles. I walk along the coastal path where teasels form a palisade to the seaward side. On my right, bordering a field, are tall stalks of seeding wild leeks (Babington’s leeks). These nod their heavy heads in the wind – clusters of dark brown seeds with wispy tendrils attached.

On the edges of the beach are the rubbery bat-wing leaves of Sea kale draped on the shingle. A few thrift flowers are in bloom, incongruously pink among the autumn colours. Sea campion is still flowering, the delicate bell-like shapes inspiring its folk-lore names of ‘dead man’s bells’, ‘witches’ thimbles’ and ‘Devil’s hatties’. The pale pink tassels of Tamarisk hang beside the path, decorating the tangle of twisted trunks and fringing the shady tunnels within the clump.

From the corner of my eye I see the seeds of the Creeping thistle float then vanish on the wind.

Last day of the summer holidays and Chesil Beach is empty. It lies like a bleached bone along the Jurassic Coast. The sky is a pale and distant blue. Autumn term is dawning and six year old Jago is moving up from the ‘Mary Anning’ class. He has his new school shoes and is noticing everything today – a lit-up moment between past and future.

We walk down the path to Cogden beach among clouds of Common blue butterflies and floating thistledown. Three-year-old Finley is singing to himself and jumping dramatically over piles of rabbit droppings. Jago can’t wait to find a fossil. On the beach he lifts a huge stone, shouting he’s found a dinosaur bone. Every stone seems marked with the traces of past life, spirals which could be ammonites, ridges that hide belemnites, curves of ancient shells and fish. I point out the seed pods of the Sea kale to Finley and he immediately starts picking off the dense black balls and planting them in the shingle.

Along the strandline is a silvery line of hundreds of dead whitebait, looking like twists of silver paper. A huge pipe, about thirty feet long, has been washed up on the beach. It is covered, inside and out, in Goose barnacles, stranded high and dry. The legend was that these goose-shaped shellfish with their long necks, eventually open their white wings and fly away as Barnacle geese.

This theory of spontaneous regeneration was put forward in the Twelfth Century by Bishop Giraldus Cambrensis who said that Irish Churchmen would eat the Barnacle goose during fasts because ‘these birds are not flesh nor being born of the flesh for they are born at first like pieces of gum on logs of timber washed by the waves. Then enclosed in shells of a free form they hang by their beaks as if from the moss clinging to the wood and so at length in process of time obtaining a sure covering of feathers, they either dive off into the waters or fly away into free air.’ This myth became widespread.

At the edge of the shingle the yellow flowers of the Horned poppy are glowing like the autumn sun, contrasting with clumps of silvery-grey Sea Kale. Today summer ended. The sky is shimmering in the puddles on the path. Jago jumps in, forgetting his new shoes, scattering shards of pale blue water across the pebbles. 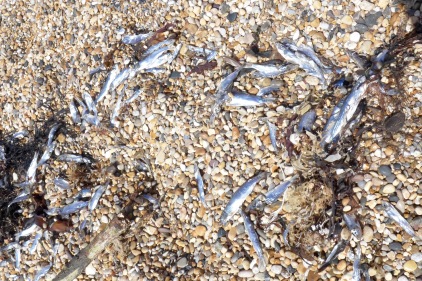 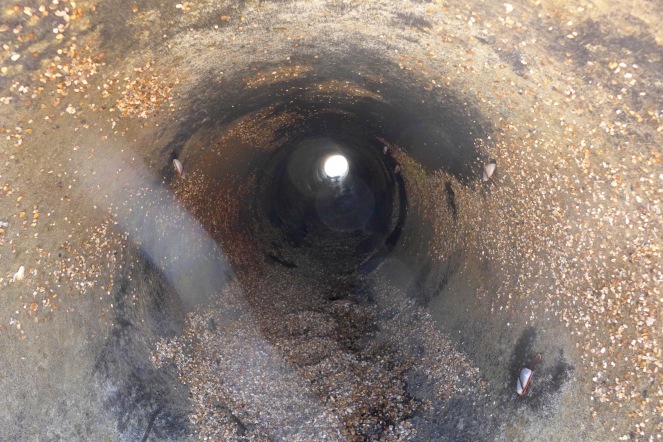 A welcome shower of rain – you could almost hear the parched ground soaking it up. I headed for Chesil beach. Buzzards and kestrels were surfing the thermals above the coast road as I arrived at Cogden, a fresh breeze blowing off the sea. A couple of holidaymakers passed by grumbling that it was ‘just stones and sea . . .’

Walking down the path to the beach, I was surrounded by swathes of wildflowers in transition from flower to seed. Tall teasels with their exquisite honeycomb pattern (each with a pale mauve tutu of flowers), deep purple thistles, (some with tousled white heads), bright yellow flowers of bristly ox-tongue, ox-eye daisies and hawkweed. White convolvulus bound everything together along with brambles with ripening blackberries. There were cushiony flowers of sea carrot and everything was underpinned with vetch.

Butterflies defied my attempts to follow their flight, jinking through the air then seeming to disappear. I saw several common blues, gatekeepers, large whites, meadow browns, tortoiseshells and speckled woods. Bees luxuriated in the flower heads, drowsy with sun.

Where the shingle started were large tough clumps of Sea Kale, blueish leaves folded and crumpled like tin foil, reflecting the sun. In the hollows of the plant were pools of water from the recent rain. Pale brown seedpods seemed to peer like aliens from long stalks.

Some spectacular Yellow Horned Poppy plants were dotted along the pebbles, the wrinkled-tissue flowers just starting to go over. This is a biennial plant with a thick rosette of blue-green leaves. Its stems are branched and up to three feet long. The seeds are produced in unusually long curved seed pods (horns).

Pincushions of thrift were tucked in amongst the shingle, holding on with their long roots, – only a few pink flowers left on spindly stems – most having seeded to papery pompoms. Flattened on the shingle were the faded blue flowers of the Sea Pea, resisting the salty winds.

There was a tangible energy coming off this place where everything was on the cusp of summer and autumn, flower and seed. Insects were in overdrive making the most of plenty, harvesting the last of the pollen before fat shiny seeds formed to float away or explode over the ground. Just stones and sea? 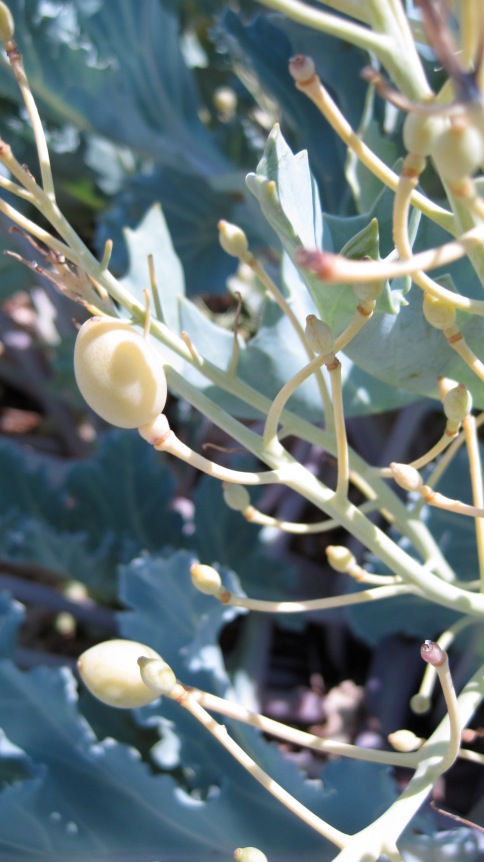 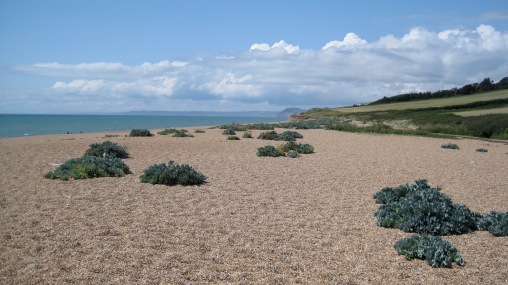 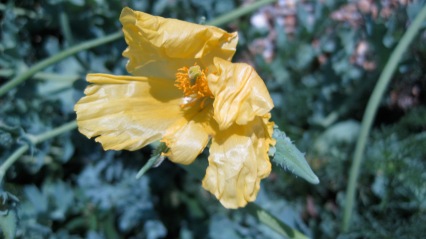 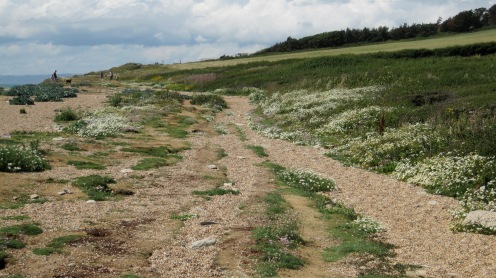 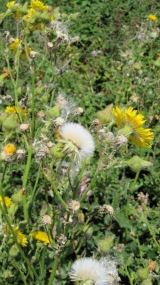 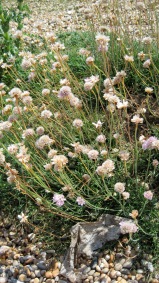 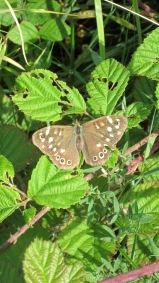 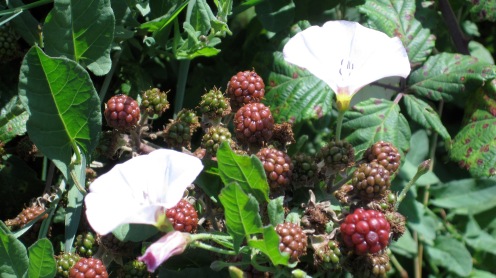 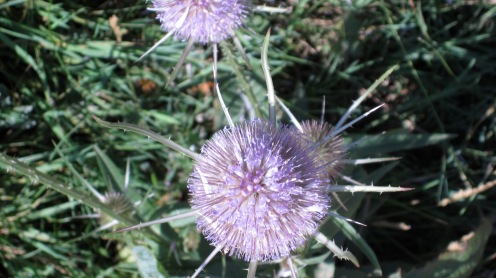 Spring on the Chesil Bank starts near the ground where there is the most shelter from the wind and salt-spray. Hares hunker down in the gullies, perfectly camouflaged against the tan and brown shingle. I was lucky to see my second hare this week as it leapt up right in front of me from one of these hollows, before jagging off across the pebbles towards the sea. 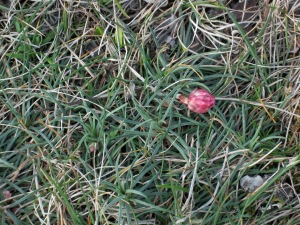 On the eastern end of the Chesil, to the lee of the Bank, several plants are tentatively starting to flower from foliage flattened against the shingle. Low clumps of Thrift are sending up small aerials with dark pink buds drawn by the sun. Tiny white petals of Danish Scurvy scatter like snow flakes among the pebbles. Common Stork’s Bill has braved the cold with delicate girly pink flowers. It’s strange how the earliest of Spring flowers always appear to be the most fragile yet survive the cold and inhospitable conditions.

Towards the western end of the Chesil Bank, however, the plants are quite different. Here the pebbles are much smaller and the shingle is sandier. Nothing is growing on the seaward side, but behind the bank of pebbles, Sea Kale is sending up new growth of rubbery purple leaves, frilled and curled against the salt winds. It is perfectly adapted to resist the harsh conditions of spray and gales with its knobbly gnarled stems, low habit and fleshy leaves.

Sea Beet, the ancestor of Chard, Beetroot and Spinach, is spreading glossy leaves in fecund clumps among the pebbles and Tree Mallows with their woody stems and umbrella-like leaves seem to withstand whatever weather is thrown at them. 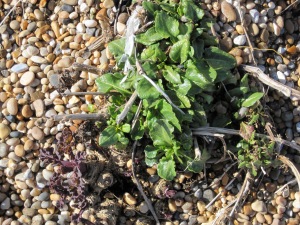 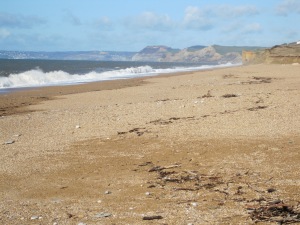 I shall be following the development of Chesil plants throughout the year with regular updates. I’m looking forward to the spectacular Horned Poppy in the Summer and the Agapanthus-like Babbington’s Leek – so watch this space!